My old dog is getting older. He turned 15 in early December, and just before then I thought we had reached the end. He was struggling to get up off his bed and walk to the door. His hind end didn’t hold him up reliably. He sometimes fell backwards and couldn’t get up without help. Getting old is not for sissies. I gave him some more rugs near his bed for traction. We tweaked his meds, added new pain killers, upped his dosage.

He did really well for almost two months, but then he had another bad spell. He either fell or had a seizure, and for about 24 hours every time he moved more than ten feet he wheezed and coughed as if he were choking. But after a day, with no changes in meds, he was fine. The turn-around came on a spring-like early February day when instead of holding himself still so as not to fall over or cause any more pain, he dropped to the grass for a good roll. It’s been another month since then, and he’s been going through another bad spell. It’s apparent that they are coming more frequently, and lasting longer. So far, he keeps getting better, but each “better” is not quite as good as the last one. 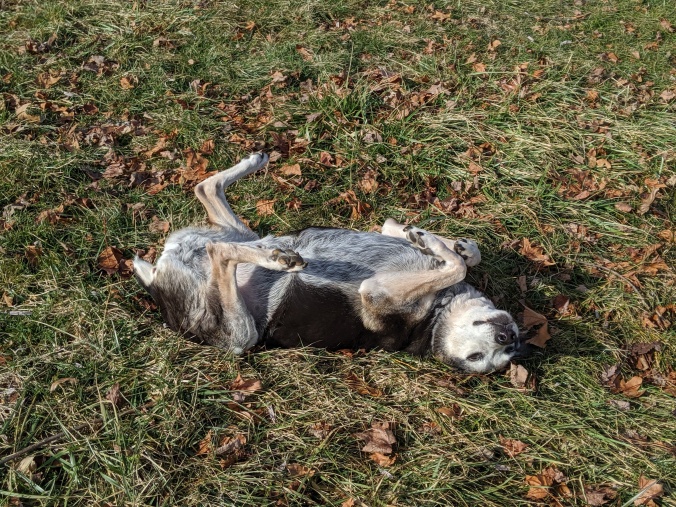 This is not my first rodeo. I am a rodeo pro, at this point, with dying loved ones of both the animal and human variety. I have nearly lost count of the rodeos. I know that at a certain point with any aging animal I begin to feel like the Dread Pirate Roberts from The Princess Bride: “Good night, Westley. Good work. Sleep well. I’ll most likely kill you in the morning.”

With the old dog, I keep watching him, wondering if tomorrow will be the day. I am fairly confident it will not.  For most of the last two months he’s been remarkably perky for a 111 year old guy. Barking at the roofers. Bossing the puppy. He still sometimes gets excited when he sees I am going to throw the tennis ball, and he bounces in front of me – “Throw it! Throw it!” – and then I throw it and he watches it go and looks back at me – “Hey, there goes your ball.”

When my father was in his last few years we had similar ups and downs. He fell down the stairs. He fell up the stairs. He wound up in the hospital (oddly, not from falling), completely disoriented and not fully aware of who or where he was, and then he came home to celebrate his 85th birthday with good cheer. He went into hospice, and then he came home yet again, and went to the Adams Morgan Day festival and got up out of his wheelchair and danced. My aunt – my mother’s sister – said “He’s like Whack-A-Mole, isn’t he?” and we laughed and laughed. Because he was.

For every pet I have had to let go, I have wondered if the time was right, was there something else I could have done, did I notice too late, what if, what if, what if? There’s an article kicking around social media recently written by a young vet about giving animals a good death. The crux of it is that waiting too long is much worse that taking action too early. I know that when I state my feelings about this I risk being accused of anthropomorphism, and to that I say two things: one, there are worse things to be accused of (and I’m not sure who ever decided that only humans are capable of certain feelings), and two, I think it’s less me viewing my dog (or horse, or cat) as human as it is me scrutinizing my own humanity.

If we let an animal keep living into old age, where by definition infirmities start to creep in, who is that worse for, them or us? If we euthanize them early enough to avoid or limit their pain, whose pain are we really eliminating? Who are we making it easier for? I wake up every morning (and often multiple times a night) wondering if this is the day I will have to make the decision. Will I sleep better when this dog has died? Yes, I will, because I will not have that decision hanging over my head any longer, and I won’t have to worry about him any more. Is that a reason to make the decision now? Not for me, not today. But maybe one day it will be.

I have said before that this old dog reminds me so much of my old father. As they both aged, their tendency to put their heads down and plow forward, keeping up the momentum so they don’t fall down, increased. The old dog has had as many ups and downs and “This is it, the time has come” moments followed by inexplicable improvements as the old man had. Was it easier for me when I got to stop wondering every day if today would be the day my father died? You bet it was. Would I have wanted that to happen sooner because it was easier on me? No. Actually not. A friend of his told me about the last time she saw him, maybe a week or two before he died, as she was leaving he raised a glass to her and said “L’Chaim!” and that was my father in a nutshell. Both the wine and the words – To Life!

Is the old dog enjoying everything about today? I’d venture to say no. But he enjoyed his breakfast, and he enjoyed greeting the crew that came to cut down the dead trees, and he enjoyed his peanut butter and kibble-filled Kong. He clearly likes the fact that we finally separated him from the other dogs today. He gets special treatment AND he doesn’t have to listen to their barking or worry about being jumped on or bumped. The old dog has his own version of toasting this life. Rolling in the grass. Wandering off because I think he is beyond getting into any serious mischief and turning up in the horse pasture eating all the poop he can before I notice. Tomorrow may still be the day. But as for today, Carpe Poopem.