Limbo is not my favorite place, yet here I am, entering week four.

I have a horse who is sick. REALLY sick. For many of the days of these limbo weeks, I have gone out to his field with the certainty that this will be the day I find him dead in his field, or down in his shed, unable to get up.

There are several blog posts I have started in my head, most of which are not about this horse, but I can’t seem to write, or do much of anything else, right now. Then I thought maybe I would write about this horse, but we are in limbo, and I don’t know how the story will end. How can you write a story when you don’t know the ending? How can you write anything at all, when all you seem to be able to do is stare at the horse?

He has lost at least a quarter of his body weight, if not more. For a minute there, he went from being a fat horse (“when is that gelding due?”) to being a thin horse, and the weight looked good off of him, but it came off too fast, and it came off because he was simply not eating. He is not quite a skeletal horse, but if you saw him in my field, you would probably call the ASPCA. I probably would, if I saw him in your field.

The vet has made several visits, and has run many tests, all of which have been inconclusive. His symptoms add up to… symptoms. They might mean a disease (one of several), or they might just be what they are because he’s not eating. The why of his not eating remains a mystery. It is a mystery to the vet. To the dentist. To the chiropractor/acupuncurist. To the craniosacral healer. To the farrier. To me. If it is not a mystery to the horse, he’s not enlightening the rest of us.

Small things have made him feel a bit brighter. He loves the fact that we have opened his gate so he can wander the lanes between the fields. None of the other horses get to do that. He teases them – and lets them flirt with him – over the fence. His walk is shaky and a bit sideways from weakness, but he covers quite a bit of ground in a day. He recently got to roll in the sand arena and I felt like I had taken a kid to the circus.

Some days he likes to be out with his best buddy, but some days when I open the gates between their two fields, they simply switch fields. Sometimes I find them crammed into one ten by twelve foot run-in shed, close enough that another horse could fit next to them, if they ever entertained the idea of letting another horse into their little world of two.

This is not my first rodeo with a possibly dying horse, but it’s hard in a different way. For one thing, he does not feel in my heart as if he is a dying horse. There have already been more than a few days when it would have made sense to call the vet out to put him down, but he is giving me no indication that it’s time and I have never had an animal not let me know. Whether I have accepted it or not is a different story, but they always say.

There is my father, stumping up the sidewalk to Starbucks for a coffee and a natter with his neighborhood cronies, shadowing my view of the horse meandering up the hill to visit over the fence with the horses in the next field.

There is my mother, the week she stayed with us the first time she got out of the hospital, and me then, trying to make small, artfully arranged plates of food to tempt her to eat – and me now, creating a cafe tray in a flat rubber pan to give the horse options of things to eat with none touching the others in case the wrong thing causes him to eat nothing at all.

The second – and last – time my mother got out of the hospital, the only thing she wanted was orange sherbet from Le Lion de la Nourriture (known to most of us as the Food Lion). For a time last week, the only thing the horse would eat was carrots. I’m pretty sure a horse can’t subsist on carrots alone, but he was still reasonably comfortable, and he really enjoyed his carrots. If every day might be his last day, I figured, let him eat carrots.

On Sunday night, I was sure we had reached the end of the road. He was no longer even interested in carrots. When I first looked out in the fields Monday morning, I thought he was down – in the exact spot I plan to bury him when the time comes. When I went outside I realized that when he stands in that spot he is over a rise in the hill, and it looks like he is lying down, but he was not.

We spent much of Monday waiting for the vet, and then talking to the vet and having the vet examine the horse. The vet did not quite say “it’s time to euthanize this horse,” but he did raise it as a possibility in the near future. This was not a surprise, or a new idea. And yet. It doesn’t quite feel like time.

The part of Monday not spent waiting for the vet or with the vet, I spent being frantic. Not doing anything, but just feeling like I was coming apart at the seams. Some time after the vet left I realized that during the decade in which we experienced the death of four horses, six cats, one dog, four parents, one dearly beloved aunt, three friends, and our children’s grandmother, we barely had time to mourn before the next death was upon us. We’ve had a respite for almost three years, during which mostly I think we remembered how to breathe, but I’d be hard pressed to say we have recovered. That’s a lot of grief for one horse to bear, when it all comes bursting out at the seams.

On Monday during the vet visit, we talked about what we would be willing to do – treat for everything it might be that is treatable – and what we would not be willing to do – drive him two hours to a horse hospital where they might say “Oh, this is what he’s dying of, isn’t that interesting?” After the vet left, we rounded up the rest of the things we had decided to treat him with. Another shadow crossed my path, reminding me of laying out the many, many pills my father needed to take in his last months, so that he – or his care giver when I could not be there – would not lose track.

Today, for whatever reason, the horse has decided to eat. He has eagerly consumed all of six small meals. Unlike my mother, who could be tempted by half a bagel with cream cheese and lox, plus a few vibrant raspberries and enormous blueberries, he is content with his senior feed. Nutritionally it may be the equivalent to Cheetos, but now is not the time to pick nits about grain quality. He ate a fenugreek flavored treat, which yesterday he would not even look at. He ate a whole handful of baby carrots.

I still don’t know the ending to the story. Tomorrow, I will still walk out to the field with my heart in my mouth if I can’t see him from the house. We may have him for many more years, or we may have him for a matter of days. Either way, he will be with us forever. 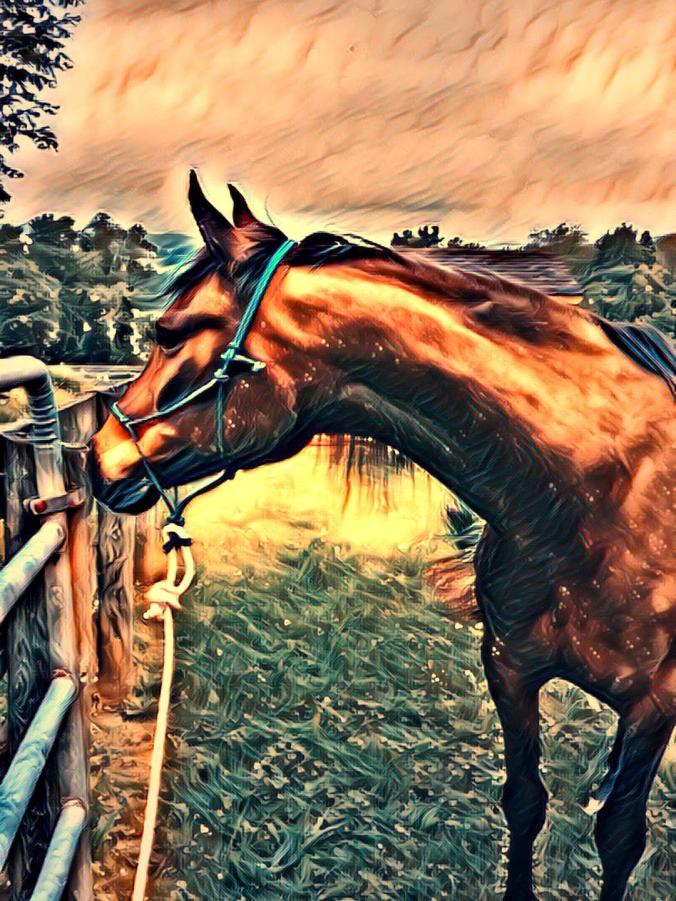