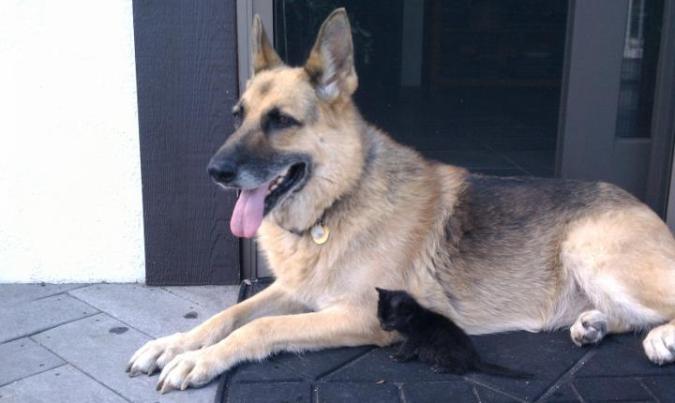 This photo of my first dog and my now sole cat turned up in my facebook memories today. I brought the kitten home from the lab on my last day at work there nine years ago, driving away with the two lives I could save. When I first brought Pigwidgeon home, I put her in a crate in the hay stall in the barn, partly because she had been found in a hay barn and I thought it might feel familiar, and partly to buy myself a little time to break Rose into the idea that I had brought home yet another kitten. Maya disappeared that afternoon and did not come back no matter how much I called her. When I finally tracked her down, she was in the barn lying next to the kitten’s crate, claiming her new charge.

I’ve been thinking all day about animal acquisitions – the various dogs, cats, horses, and rodents that I have had over the years, and how they came into my life. My clearest memory of a pet introduction from my childhood is the rats. In 1972, the Chinese Year of the Rat, some friends of my parents came for dinner one night bearing two young rats for us to keep as pets. In my memory, the wife waited till after dinner and then pulled the rats – surprise! – out of her purse. Of course we had no cage, so that night we put them in a doll house from which they promptly escaped, but were retrieved before they went far. My oldest sister Darcy named them Cindy and Jennifer.

As Cindy and Jennifer grew up, Jennifer developed what we feared was a tumor. My mother called a friend who was a doctor (in retrospect I realize he was a PhD, not an MD, but he did work at the NIH) to ask his advice, and he suggested some brandy on a sugar cube. It didn’t do much to cure the tumor, but after Cindy gave birth to her first litter of babies it dawned on all of us that it was less tumor and more testes that Jennifer had developed. Jennifer remained Jennifer throughout her long life.

Darcy carefully chronicled the Ratti family generations in her perfect script in the back of a book called The Five Little Peppers, much the way I gather some families keep their own lineage in the family bible. According to The Five Little Peppers, Cindy’s formal name was Sindin. The first litter included Brown Sugar and Milky Way Bar. As time went on and rats added up, we had Lemonsadio, and Stale Bread Pudding, and Demitri Capeltiodis. There were rats named Linda and Richard Richard, so named for some married neighbors because when Linda got exasperated with Richard (which was often), she would say “Richard, Richard.”

The Five Little Peppers does not contain the detailed begats, though I’m sure Darcy would have remembered exactly which rat was the mother of which others (the fathers were a less certain thing). Darcy remembered the order and names of the 13 children in our mother’s mother’s family. She could identify who was who in every photo in every photo album, and what relation they were to us. She could recite family stories from our great-grandparents’ generation as if she had been there. She remembered every birthday.

Eight years ago my aunt and my father died within two weeks of each other, seven years after my mother’s death and nearly thirty years after my uncle’s death. I had a conversation with one of my cousins then about how odd it was to suddenly be the oldest generation in our family. At the time it did not occur to me that we would do anything but keep growing older as the older generation. But then last year, Darcy died.

I still have The Five Little Peppers, and when I think about the the Ratti names, I think about Darcy’s particular brand of creativity. She was the inventor of many of our childhood games. There was a game called Ghosties that my cousins and I can’t remember except that it involved being outside in the evening in our pajamas, and something to do with the streetlamp in front of our house. There was a game I remember nothing at all about but it was called Fall in the Toilet Orphanage and possibly that’s all I need to know. There was a game called Grand Championship that must have taken all day. First, the three of us sisters gathered all of our dolls and stuffed animals at the top of the stairs. Then, one by one, we slid them down the banister to the first floor. Anyone who fell off part way down had to come back up until they could make it all the way down on the banister. Since not all the dolls and animals were a convenient size or shape for banister-sliding, this part alone took quite a while. Once all the dolls and animals were gathered in three piles in the living room, two sisters would take one doll or animal each, stand at opposite ends of the living room, and simultaneously toss the dolls or animals to the opposite sister. They would do this back and forth until one of the dolls or animals fell, and that doll or animal would be out of the game. The third sister would come in with a doll or animal and play against the doll or animal who won the previous round. This would go on until there was only one doll or animal who had not been dropped, and that would be the Grand Champion. Not the sister, mind you, but the doll or animal.

When I think about Darcy I will always think about ballet. She was a dancer from at least the time I was born. I don’t even know how old she was when she started putting on annual performances of The Nutcracker in our basement – certainly no older than 11 or 12. Darcy choreographed, directed, cast, made costumes and sets for, and of course starred in, these productions. She was Dr. Drosselmeyer, the Nutcracker, and the Mouse King, which created interesting staging for the big sword fight when only one of them could be on stage at a time, but she made it work. She was always in one or more of the dances in the second act. There was one boy in the neighborhood who she was able to persuade to participate for a couple of years, and he played Fritz in the first act. There were always two Claras – Clara in the first act, and Clara in the second act. I still think of them as two distinct characters. Clara in the first act had a dancing role, and got to wear the pink party dress. This role rotated between my sister Rachel and her friends. In the early ballets I got stuck with Clara in the second act, in which I had to wear a nightgown and sit in a chair and watch the other dancers. Later I got to be a Candy Cane, which is still my favorite music and dance in every version of the ballet I have seen, but I never was Clara in the first act. Somewhere, however, there is a photo of me taken from behind, as I looked into a mirror to adjust my extremely home made aluminum foil crown. I am roughly 4 in this photo. You can see my face in the mirror and the look of delight on my face (I’m a princess! I’m wearing a beautiful crown!) tells all you need to know about the magic Darcy managed to create.

Some days I want to think about the complexities of relationships and families and memories, but today I just want a little magic. 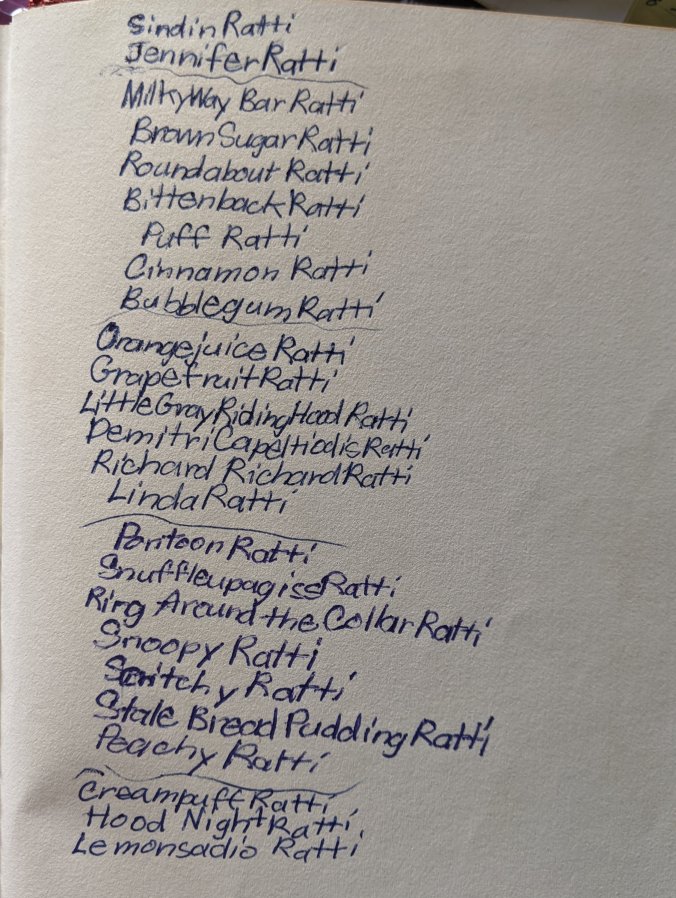 2 thoughts on “Year of the Rat”