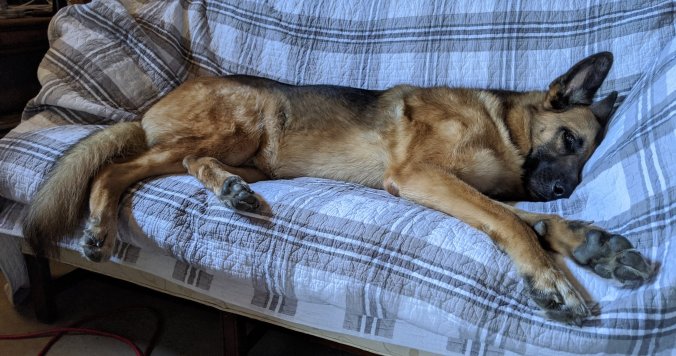 My pandemic “don’t feel like it” has been compounded exponentially by weather-related “don’t feel like it.” It is HOT. And dry. I know not that many months ago I was cursing the clouds and the rain, but I would give a lot for a rainy day or three right about now. This morning there were just enough clouds while the sun was rising that I was able to get the horses tended to without also sizzling in the sun, but now the sun is out and making up for lost time.

The dogs and I have been on our own in the house for nearly a month now. We have a routine, because we all like routines, but lately more and more of our routine involves lying on the sofa, or the floor. I think they have the right idea with the cool basement floor, or the kitchen tile by the air conditioning vents. I haven’t tried it yet, but it’s only a matter of time till I find myself splayed out on the concrete with the rest of my pack.

When the pandemic stay-at-home orders began, my social media feeds were full of suggestions for what to do with all our free time. I spent the first month being puzzled by this, and much of the time since then being annoyed by it. I’ve been working from home for sixteen years. I am not a social person. I have the same number of animals I had before the pandemic. Basically, nothing has changed in my day to day routine. I have no more or less free time than I had before. I do not have the time or the inclination to take up new hobbies, start a new workout routine, meditate, or begin any other form of self improvement. I almost want to ask who HAS been doing any of these things (outside of talking about it on social media), but really that’s just one more thing I don’t want to spend time paying attention to.

Now, with Rose away, I have one more layer of what-I-could-be-doing-but-I’m-not. If you have been in a house with someone else, or more than one someone else, since the pandemic began, do you think there are things you would do if it was just you in the house? If you had all the alone time you haven’t had for the last several months? I’m not sure where I thought more time might appear in my day, but once again it did not. I do all the same things I was doing before, only now I do all of them by myself. I probably talk to the dogs even more than I did before.

Most of the time, the dogs tell me to chill out. Occasionally, they tell me to take them outside, but they usually remember why that was a bad idea as soon as they get there. If we are out early enough, Quinn can sometimes talk Boo into a game of zoomies, but not very often. Scout is emphatically not interested, and who can blame him? He and I are in no mood to run as fast as we can. Or at all.

Dogs have no need for self-improvement projects. They think they are just fine as they are, and I have to say I agree. One of the very nicest things about dogs is that they think we are just fine as we are too. We are at our best when we calm down enough from all the human things to just sit on the sofa, with maybe some popcorn we are willing to share. That is enough.