We have three dogs. I’m sure there are things that can be said about them based on birth order now that they are all in one household. We made a lot of mistakes and did a lot of learning on the oldest. The middle one is precocious and self-activating in the particular way of middle children. The youngest is spoiled but does not take advantage of it (much), and tries harder to please and to be noticed than the other two do. He likes to always be touching one of his dogs or humans, whether for comfort or to make sure we know he’s there, I’m not sure.I am also the youngest of three, so I may relate to him a little more than is good for me.

I have seen no evidence that our dogs fight with each other when we are not with them. I’m sure our kids also get along better when they laugh at us together in our absence then when they are with us and keeping an eye on who gets how much attention. Birth order behaviors and sibling rivalries and alliances aside, there is no getting around the fact that as long as parents are there they have a huge impact on the family dynamic, and for better or worse it changes when they are not.

Our human children are also three in number. They like to say we have replaced them, now that we have three dogs. This is a conversation they have had amongst themselves that at least one has reported back to us. I know the kinds of conversations my sisters and I have had about our parents, and I don’t have a lot of illusions that our kids sit around saying “you know what I love most about our parents?” They tell stories about when we’ve annoyed them, or infuriated them, or, if we are lucky, made them laugh. 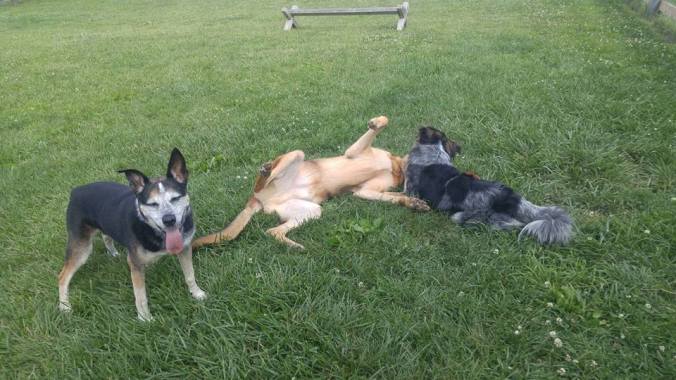 If our animals could talk I’m pretty sure all their stories about us would begin “Remember the time they thought it would be a good idea to…?” Come to think of it, our kids’ stories might start out just like that too. I wonder sometimes which stories they do tell when we are not around, and if those will be the same stories they will tell when we are gone.

The story I tell most often is about Rose’s first Thanksgiving with my family. The guests included my parents, my oldest sister, her husband, their three kids, me, Rose, and my father’s friend Stan. Stan was one of those family friends who has always been around, and since his wife died very young he had spent just about every holiday or birthday celebration with us.

I don’t know if Stan was born a curmudgeon or if he had curmudgeonliness thrust upon him, but the level of it increased dramatically over the years. He and my father loved to debate loudly on the few points on which they agreed, and and on the many, many points on which they disagreed. They agreed about the state of the world (decaying), the state of politics (deplorable), the state of the newspaper industry (deteriorating). They did not agree on Stan’s feeling that life was generally being ruined by women: his woman boss was making his job miserable, movies were being destroyed by woman directors, and it was only a matter of time before woman politicians would bring about the downfall of society as he knew it.

My mother called me before Thanksgiving to give me a list of things not to talk about in an effort not to set Stanley off. On the list were (it was the early ’90’s) the movie The Piano (woman director), his job (woman boss), John and Lorena Bobbitt (woman run amok), the Bobbitt-inspired New Yorker cartoon where the nice looking elderly lady says to her nice looking elderly husband across the breakfast table “Pass the cream or I’ll cut off your penis,” and presumably (though not explicitly) the fact that I was bringing my girlfriend home for Thanksgiving.

Dinner was uneventful until my oldest sister excused her kids from the table. We had managed to avoid any untoward topics and we all enjoyed the customary combination of traditional Thanksgiving foods and tofu from a local Chinese takeout. My mother sat back and surveyed the table, and then said pleasantly to the room at large “Pass the cranberry sauce or I’ll cut off your penis.”

We all roared. Well, most of us. Stanley turned instantly red and sputtered “I suppose you all think that’s VERY FUNNY!”

My father turned just as red and yelled back “What, do you think we’re all assholes, Stan? There are seven people at the table! Six of them are laughing! WHO’S THE ASSHOLE, STAN?”

My mother looked at us all, a pleased smile on her lips.

I can only hope to provide stories to my own kids that get half the longevity that one has had for me. If I had only one story to tell about my family for the rest of my life, that would be the one I would tell. I told it to my sister who was not there that night, twelve years later as we sat around the same dining room table in my parents’ apartment. When I went to see my mother in the hospital bed in her bedroom, she wanted to know what had made us all laugh so hard, so I told it to her as well, and we laughed all over again.

The next morning she went into hospice. She died four days later, the windows open to the night air and the scent of cherry blossoms from the garden planted by other people’s children in memory of their parents who died there too.

4 thoughts on “The Pack”